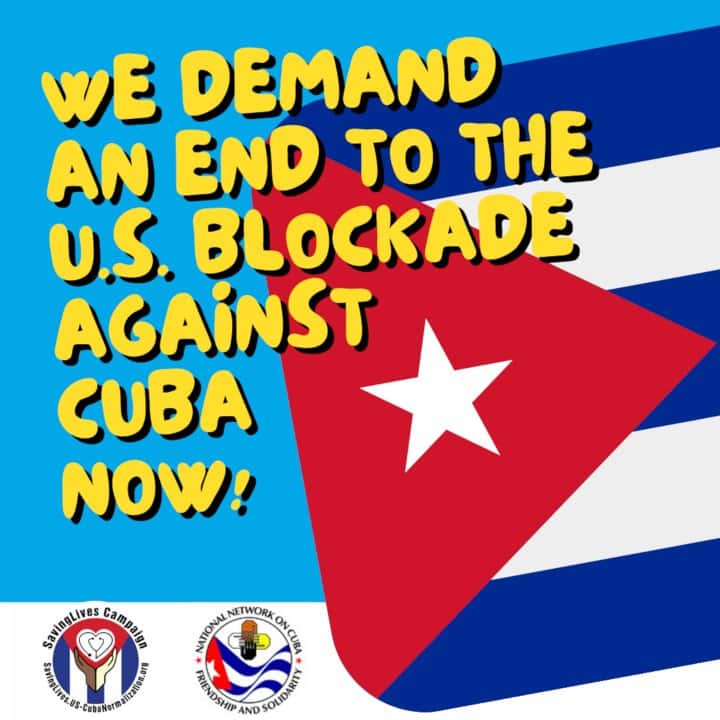 June 22, Detroit — Today, the National Network on Cuba (NNOC), partner organizations, as well as academics, elected officials, labor leaders and Cuban Americans will gather for a press conference highlighting the ongoing humanitarian crisis caused by the United States blockade against Cuba. Speakers include a representative from the Cuban-American organization Project EL PAN, an independent Cuban journalist, a leader of the Seattle chapter of the A. Philip Randolph Institute, and a member of the International Longshore and Warehouse Union.

This conference will be held prior to the United Nations (U.N.) annual vote on resolution 74/7 of the United Nations General Assembly: “Necessity of ending the economic, commercial and financial blockade imposed by the United States of America against Cuba,” scheduled for tomorrow, June 23. Participating organizations will speak to the urgency of the need for the U.S. to vote “yes” and end the blockade against Cuba immediately.

Cuban-American, Felix Sharpe-Caballero said, “Given the pandemic and the policies of the previous administration, intended to create suffering, never has it been more difficult for the Cuban People. But never before have Cuban Americans joined together to call on the genocide to end. In cities, counties, school boards and State Legislatures representing greater than 35 million people, through resolution, Americans are also calling on President Biden to act on Cuba.”

Since 1992, an overwhelming majority of U.N. member countries have continuously voted to end the embargo as well. During the most recent vote in 2019, 187 Member States demonstrated their support for the resolution to end the blockade, while only Brazil and Israel joined the U.S. in voting no.

“According to international law, the United States does not have the right, politically or morally, to dictate the actions of sovereign nations like Cuba, and those who wish to build relationships with Cuba. Why is the United States government positioned above international law? The world stands with Cuba, and so should we. It’s time to end the U.S. sanctions against Cuba,” said Gail Walker, Executive Director of the Interreligious Foundation for Community Organizations, the administering organization for U.S. medical students studying at Cuba’s Latin American School of Medicine.

This embargo, known in Cuba as el bloqueo (the blockade), is the longest documented economic war in modern history. It has resulted in the Cuban people suffering food and medical shortages, issues which have been exacerbated since the start of the COVID-19 pandemic. In addition to Cubans suffering domestically from the United States’ embargo, millions of African, Latin American and Caribbean people, who rely on medical support from Cuba, also suffer from this inhumane policy.

For more information regarding the United States blockade against Cuba, please visit or contact the following partners: