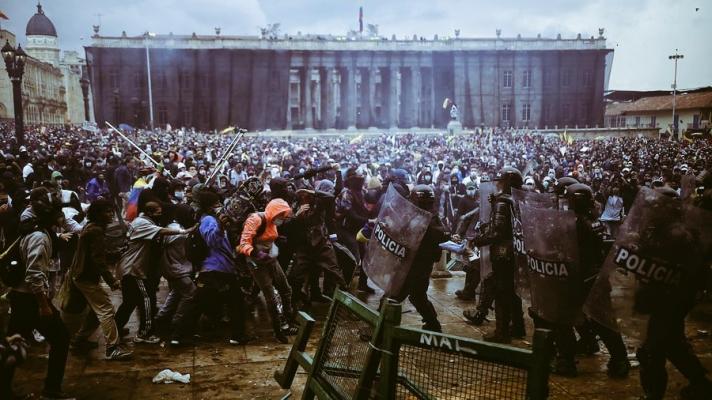 On April 28 there was a national strike and march in rejection of President Iván Duque’s tax reform and a health reform bill that seeks to deepen the failed model of privatization established in the health system.

The tax reform would impose a 19 percent VAT on eggs, meat, fish, coffee and salt, and proposes to tax salaries over 2.4 million pesos per month and pensions over 7 million pesos, to freeze for five years the salaries of public employees and even a scandalous tax on burials. The protesters had to overcome two factors. First, the third peak of the pandemic. The Ministry of Health reported that day an accumulated death toll of 72,725, one of the highest in the world per million inhabitants, higher than that of India and the United States.

A second factor was the judicial prohibition of the protest, which was not heeded by either the organizers or the local authorities. Despite being rejected by the government and the mainstream media, the marches were massive taking place in at least 600 of the country’s 1,100 municipalities.

In a previous survey, 73 percent of the population expressed their support for the strike and 35 percent said they would be willing to take that position to the streets. Seven million people took part in the strike and marches, with mobilization in Bogotá, Medellín, Cali, Barranquilla, Bucaramanga, Manizales and Pereira standing out. Clashes with riot police were severe in Cali and Bogotá. Mirar al Sur reported that there were eight deaths due to police repression.

The crisis in Colombia is very deep, has been going on for a long time, but has deepened with the pandemic. Income poverty increased 6.8 percent and reached 42.5 percent, which means that 21.2 million Colombians cannot meet their basic needs. Extreme poverty now impacts 7.4 million people. To make matters worse, the government is trying to take the country back to war and more and more people are opposing it. The assassinations of social activists and former FARC combatants who have joined the peace process continue unabated.