Though there’s no end to the pandemic in sight, including new mutations being confirmed at the University of Maryland College Park campus, Maryland Gov. Larry Hogan ordered public-sector workers back to work.

Of course, most public-sector workers, essential or non-essential, did not have the luxury of working from home. Many public-sector workers in Maryland — teachers, custodians, sanitation workers, government employees, to name some — have been in the line of fire since the very first COVID-19 shutdowns.

For much of that time, they’ve had to work in unsanitary conditions, hostile work environments, and without hazard pay or employer-provided PPE. 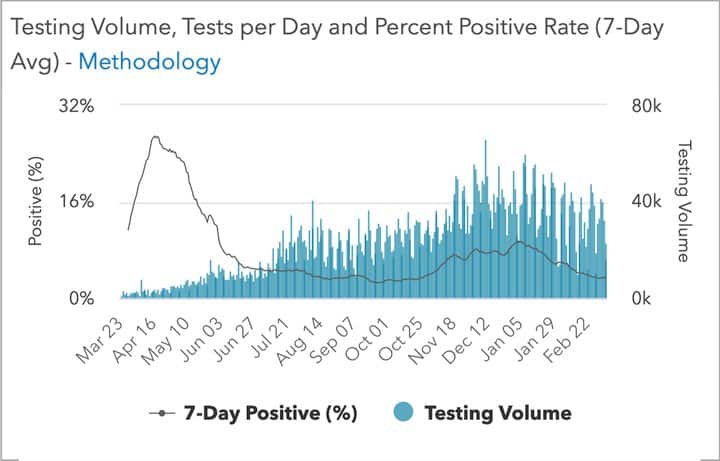 When we fight, we win! A victory for Baltimore City teachers

Governor Hogan originally ordered the reopening of schools for the middle of February. In response, the Baltimore Teachers Union, an affiliate of the American Federation of Teachers-Maryland, held a massive online meeting of over 2,000 participants, followed by a 300-vehicle car caravan.

On their widely-circulated petition, the union demanded that:

“It’s been a team effort as we continue to work for a safe reopening plan,” said Diana Desierto, a speech pathologist for Baltimore City Public Schools and chair for the BTU’s International Committee.

“The recent victories led by student group SOMOS pressured Comcast to increase internet speed for certain packages, a 300-plus car rally led by BTU members and parents, as well as students organizing a strike, forced the school district to delay in-person learning by two weeks.

“We are not finished yet, as we hope that more safety measures are put in place before we all return.”

The union forced the governor’s hand. But this only delayed the schools’ reopening by two weeks.

On March 19, the BTU tweeted a COVID-19 update, indicating a sudden jump in positive cases. 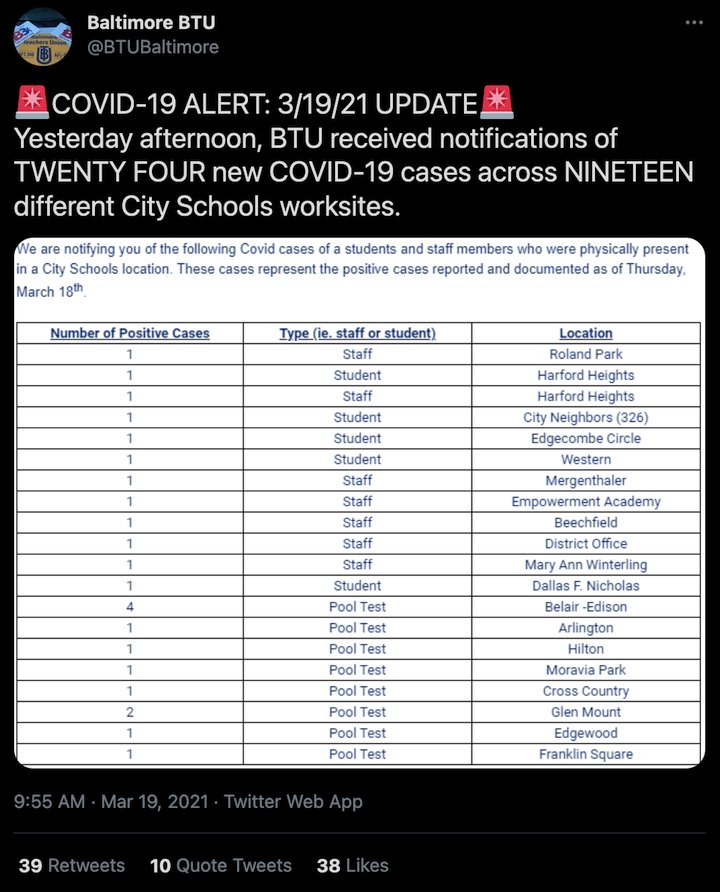 Uniting to fight for protections

This bill would give workers in Maryland the right to refuse unsafe work conditions, a guarantee of employer-provided PPE, $3 per hour hazard pay for essential employees, and universal health and bereavement leave.

On March 18, the coalition hosted a virtual Remembrance Ceremony with moving testimony from community leaders and public sector employees all over Maryland about the people they lost to COVID-19 and the conditions they faced on the front line.

At the time of writing, the Maryland Essential Workers Act has been referred to committee in both the Maryland House and Senate.

Almost a year before the initial COVID-19 lockdowns, the Baltimore County Library Employees quietly began working with the International Association of Machinists and Aerospace Workers (IAMAW) to start fighting for a union and collective bargaining. A few members of the Peoples Power Assembly were involved from the beginning.

“I worked for the Baltimore County Public Library for 10 years, and over that course of time I occupied positions on both the circulation and librarian side of things before I voluntarily left to pursue my education,” said Matt Ross, a BCPL worker at the time the union campaign started. “I think a union will be important for current employees, many of whom I am still very close with, because oftentimes there were changes made to positions by management, without the input of the employees.”

Ross explained: “The most recent change that was really aggravating was how they changed the way a portion of our paid time off accrued, which resulted in a net decrease in time off. It wasn’t necessarily a big portion of time that was lost, but it was the principle of the whole thing.

“We, the employees, were losing out because of a decision made by the administration. It was part of a continuing trend of this kind of behavior and I think it really needs to change.”

As soon as the first COVID-19 lockdowns began, BCPL employees kicked it into high gear, understanding how important their libraries are to their communities. Now, in the 2020-21 Maryland legislative session, the bill for their right to collective bargaining is on the floor.

The BCPL Board of Directors, despite promising the workers they would do nothing to stand in the way of the collective bargaining bill, launched a union-busting campaign as soon as the bill hit the General Assembly.

They hired anti-union lobbyists who spread a rumor among Baltimore County parents that “the union would prevent the library from opening.” These parents then took to highly-populated Facebook groups to spread this blatant lie so that others would contact their Maryland representatives and urge them to vote “no” on the collective bargaining bill.

The Peoples Power Assembly rang the alarm on social media, urging Maryland constituents to contact their representatives to alert them to this union-busting campaign and pressure them to vote “yes” for the BCPL union.

Ex-BCPL worker Ross added: “Seeing BCPL talk publicly about their employees’ right to collective bargaining, then finding out they had hired a lobbying firm from Washington, D.C., to challenge the bill, was not surprising. They have a pattern of saying one thing and doing another.

“They talk about supporting progress, being anti-racist, being for equality, and how librarians pride themselves on being institutions of democracy. Yet when the employees want a more democratic relationship with their employer, they hire a lobbying firm to fight them in the General Assembly.”

At this time, the collective bargaining bill has been passed by the Baltimore County delegations in both the House and Senate, crossed chambers, and is working through committees. The House and Senate versions must be reconciled and passed before going to the governor.

Organizer Bridget Fitzgerald added: “We’re looking forward to seeing this bill passed, successfully going through the election process, then helping BCPL employees negotiate a contract that protects the best things about their jobs and gives them a voice in improvements.”

Blatant COVID violations by the MTA

A Maryland Transit Administration superintendent forced a worker to come into work despite living with his wife, son and grandson, who all tested positive for COVID-19. When this worker provided a doctor’s note recommending that he stay quarantined for ten days, the superintendent said that he didn’t care — report to work or lose your job.

Another worker, who was in the hospital with COVID-19, struggling to breathe, kept receiving calls from the same superintendent, demanding to know when she would return to work. When she recovered and returned to work, this superintendent retaliated by changing her schedule to the most inconvenient shifts.

Because some of these instances are in process of either being grieved or pursued in the State Labor Relations Board, specific details cannot be released.

Without revealing too much — in response, the MTA workers are getting organized.

The recurring theme in these struggles is that the organized fightback is key. It’s also crucial to note that despite decades of union-busting, labor struggles are popping up everywhere. Workers everywhere are recognizing the absolute necessity to get organized and fight for their survival.