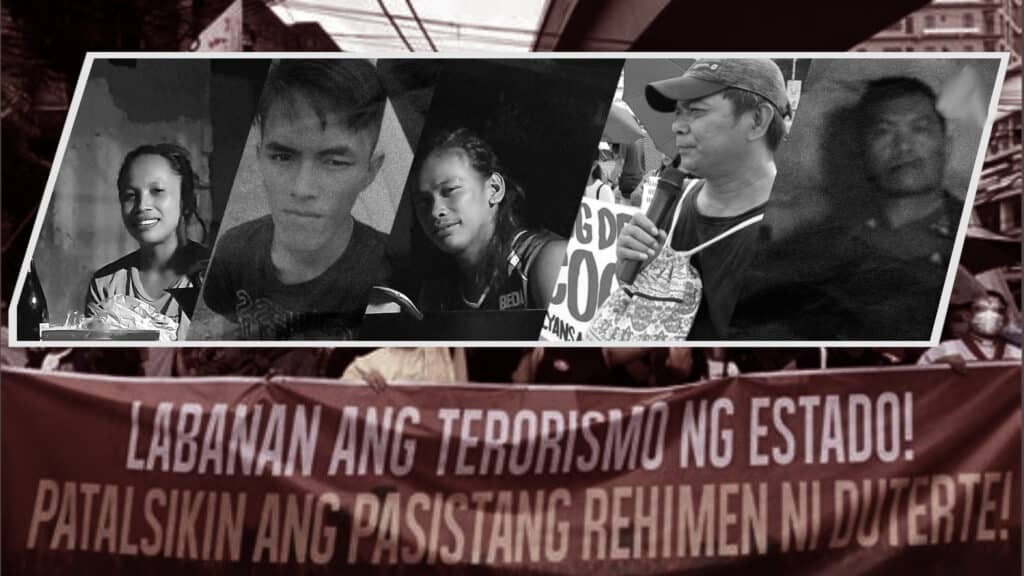 The Communist Party of the Philippines and all revolutionary forces condemn in the strongest terms the spate of extrajudicial killings and arrests carried out by the Armed Forces of the Philippines (AFP) and Philippine National Police (PNP) across the Southern Tagalog and Bicol regions. At least 11 people, mostly peasant activists, have been murdered in cold blood by police and military forces since March 1.

Early morning today, at least six activists and prominent leaders of the mass movement were killed and nine others arrested in operations carried out by police and military forces against various democratic mass organizations in Southern Tagalog.

These coordinated attacks in Southern Tagalog come at the heels of successive and coordinated murders by military and police forces in Camarines Norte and Camarines Sur provinces in the Bicol region since March 1 where at least five were killed.

The CPP holds Rodrigo Duterte himself, and his minions in the Armed Forces of the Philippines (AFP) and Philippine National Police (PNP) for these fascist crimes. We single out Gen. Antonio Parlade, commander of the Southern Luzon Command (SolCom), as among the key masterminds behind these crimes. Gen. Parlade has repeatedly red-tagged and threatened various mass organizations.

The murders and mass arrest of activists mark a heightening of the Duterte tyrannical regime’s dirty war against all patriotic and democratic forces in Southern Tagalog, Bicol and across the country. It follows the pattern of coordinated attacks carried out by the military and police against legal mass organizations in Panay, Negros, NCR, NEM, and other regions over the past years.

These attacks confirm that Duterte is the number one terrorist in the country today. He employs the armed forces and police to instill fear among the people in the hope of making them bow to his power. In killing unarmed people, Duterte continues to prove himself a big fascist coward.

The brutal crackdown confirms that the country is under undeclared martial law, after the enactment of the Anti-Terror Law. The attacks are clearly a frenzied response to Duterte’s marching orders two days ago where he told the AFP and PNP to “forget about human rights” and ordered them to “kill, kill, kill” members of the New People’s Army (NPA). Duterte’s counterinsurgency drive, however, continues to expand its scope targetting the peasants masses and legal democratic forces in the cities. To justify the extrajudicial killings, the military and police have resorted to their trite claims that the victims were armed and that they “fought back.”

In his desperation to silence the people and perpetuate his oppressive political dynasty of corruption, fascism and national treachery, more and more attacks are likely to be carried out soon.

We call on the Filipino people to manifest their indignation and protest these atrocious crimes of state terrorism and gross violations of human rights. We urge the friends of the Filipino people abroad to condemn and help expose the brutal attacks and the Duterte regime’s growing list of fascist crimes.

The New People’s Army (NPA) must mobilize its units to help secure the people being persecuted and hunted down by the fascist regime. Targets of Duterte’s state terrorism can be absorbed by NPA units or provided safe haven within the NPA’s guerrilla base areas. NPA commands must take the initiative to carry out tactical offensives to punish the perpetrators and masterminds of these crimes.