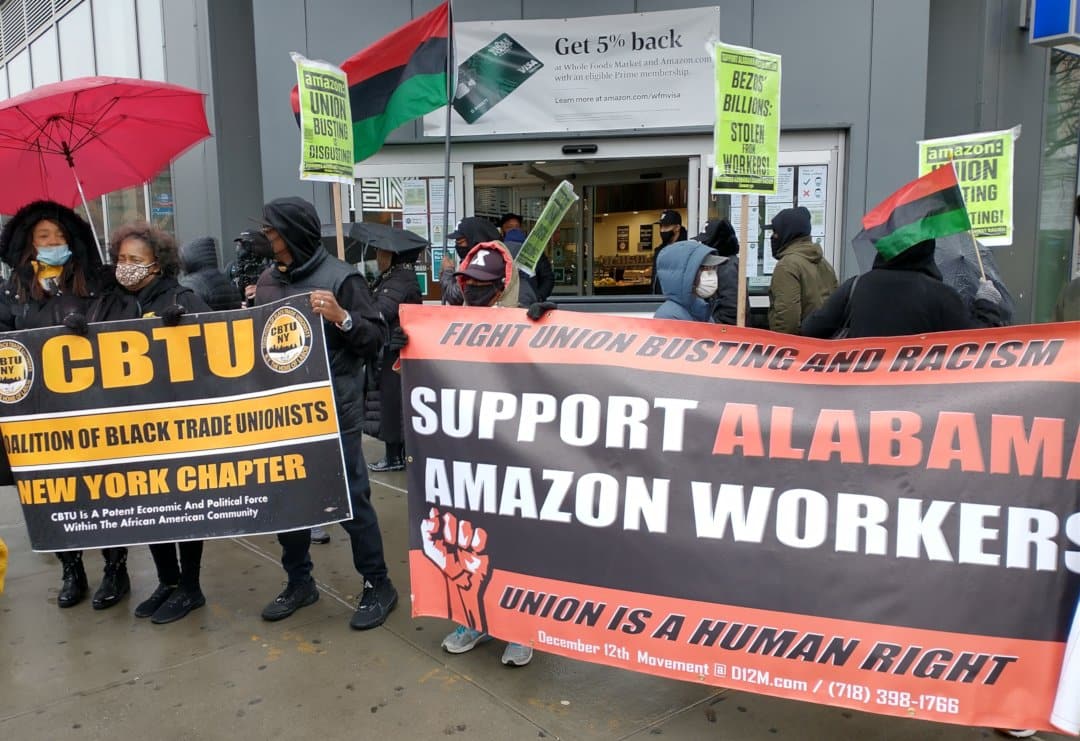 Winter rain didn’t stop people from coming out on Feb. 28 in Harlem to show their support for the Amazon workers in Bessemer, Ala. More than a hundred people demonstrated in front of the Amazon-owned Whole Foods store at 125th Street and Malcolm X Blvd.

The demonstrators also marched around the busy intersection in the middle of Harlem, blocking traffic. Drivers honked their horns in support of the Amazon workers. Nobody likes Amazon owner Jeff Bezos, who has a $190 billion fortune while his workers are timed during trips to the bathroom.

The action was called by the New York Coalition of Black Trade Unionists, the December 12th Movement and the Workers Assembly Against Racism. People came to “end Black history month making Black history,” as the call for the action stated.

Charles Jenkins, president of the New York CBTU, pointed out that 6,000 workers at the Amazon warehouse in Bessemer are already voting by mail in order to get union rights, wages and benefits.

Jenkins, who’s an officer of Transport Workers Union Local 100 which represents New York City transit workers, said a victory in Bessemer will inspire hundreds of thousands of other Amazon workers to fight for a union, too.

Chris Silvera, Secretary-Treasurer of Teamsters Local 808, spoke of the millions of workers in stores and other workplaces who need union dignity and protection.

Roger Wareham of the December 12th Movement welcomed members of a caravan calling for an end to the U.S. blockade of Cuba. The members of the New York-New Jersey Cuba Sí Coalition had stopped to show their support for the Amazon workers.