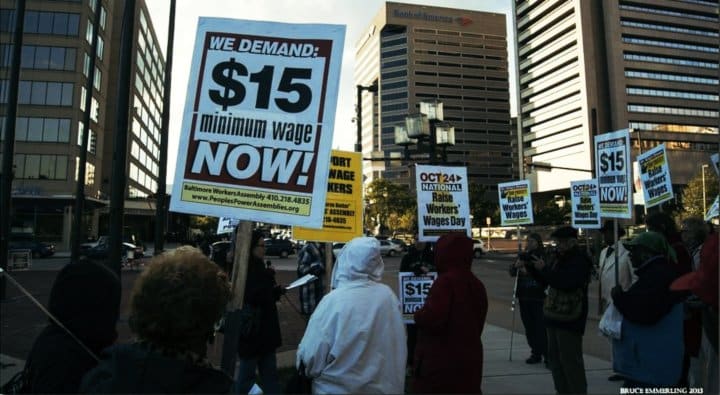 Almost 13 million people in the U.S. are “officially” jobless. The real number is far higher. Many haven’t received an unemployment check in weeks.

Then there’s Jeff Bezos, who runs Amazon and owns the Washington Post. His stash ballooned by another $72 billion in the last six months.

Over a million people have died of the coronavirus around the world. More than 210,000 expired in the United States of Trump.

But it’s been partytime for the super rich. Millions line up at food pantries and worry about being evicted or losing their home. Meanwhile, U.S. billionaires gained another $845 billion in wealth according to the Institute for Policy Studies.

This nearly trillion-dollar gain during the pandemic is merely dessert for these parasites. They’ve been having a feast for nearly 50 years.

If workers were receiving the same share of the economy as they had in 1975, their wages would have approximately doubled by 2018.

These figures represent another $2.5 trillion dollars stolen every year from poor and working people by the wealthy and powerful.

The study showing this “Grand Theft Payday” was commissioned by Seattle’s Fair Work Center and carried out by the RAND Corporation, a Pentagon think tank. Inequality has become so massive and repulsive that it’s obvious to RAND analysts who usually work for the military-industrial complex.

This massive transfer of income isn’t the result of sunspots or UFOs. It’s the product of a worldwide class struggle between the rich and the rest of us.

The class struggle doesn’t just include workers on strike or future union organizing drives at Amazon or Walmart. Every fightback against oppression is a class struggle.

The height of the Black liberation struggle was in the 1960s and early 1970s. The master class was pushed back.

Harlem Congressperson Adam Clayton Powell Jr. fought to increase the minimum wage and make it cover millions more workers. Just to keep up with inflation, the federal minimum wage of $1.60 per hour — enacted in February 1968 — would have to be $12.16 today.

Union workers suffered job cuts because of automation. Thousands of unionized workplaces were shut down, particularly in the Midwest and Northeast.

Members of Local 3 of the International Brotherhood of Electrical Workers in New York have been on strike against the Spectrum cable monopoly since March 28, 2017. The banksters that lent Spectrum billions have insisted on this union busting.

In the capital of capitalism, 114,000 New York City schoolchildren are homeless. Despite a 60-year-long U.S. economic blockade, not a single child in socialist Cuba is homeless.

We need a socialist revolution

The biggest defeat for poor people was the overthrow of the Soviet Union and the socialist countries of Eastern Europe. Reconstruction’s bloody overthrow guaranteed decades of hell for Black people in the U.S. The Soviet Union’s downfall was followed by 30 years of more cutbacks.

The Fair Work Center is demanding a new deal of the capitalist card game, at least back to the conditions of 1975. The RAND study shows that a minimum wage of at least $20 per hour is perfectly feasible.

Why don’t we get rid of the capitalist card game altogether? Every cent of profit is produced by the working class, both employed and unemployed.

Karl Marx called what the banksters, landlords and capitalists steal from us “surplus value.” That’s because the wages and benefits we get are only a fraction of the value that the entire working class produces.

The long period of reaction we’ve suffered isn’t unique. Globalization isn’t new. The capitalist world market was jumpstarted by the African Holocaust and the genocide of Indigenous peoples throughout the Americas.

Hundreds of billions of dollars in profits continue to flow to Wall Street from super exploited workers in Africa, Asia, Latin America and the Pacific islands. They need reparations, as do Black and Indigenous people in the U.S.

Decades of struggle around the world led to the Bolshevik Revolution in 1917. Other socialist revolutions were inspired by the Bolshevik example.

A growing tide of struggle will continue no matter what happens in the presidential election. Part of that struggle is spreading knowledge of socialism. We need a socialist revolution just to stop capitalism from cooking the earth.